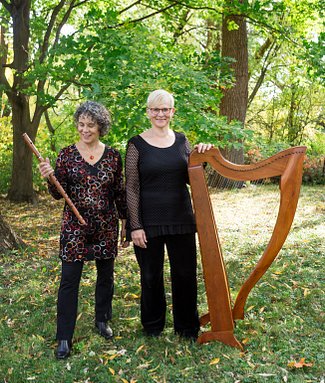 The Flute and Harp duo of Sheila White and Lucile Brais Hildesheim has been performing and recording for over ten years. Their repertoire includes well known selections from over the centuries, from early baroque and traditional through to music of this era. The duo also create their own arrangements and have premiered pieces by contemporary Canadian composers.

Their 2017 album When Winter Comes  bridges classical and traditional music, with original arrangements that create a rich and intimate sound. It demonstrates the duo's passion for breathing new life into the beauty of traditional music. The new 2021 album Golden Hills, is a collage of Celtic, comtemporary and original music.

They draw inspiration from the various types of instruments they play including classical, celtic flutes and harps, and electric harp.